Three remarkable journalists who were assassinated because of their profession, and because they were women. They were made to pay the ultimate price for their integrity. For their commitment to revealing the truth. For being outspoken. For being fearless.

For many women journalists, the first place they experience harassment is the newsroom. Unscrupulous colleagues, media leaders and mentors all too often take advantage of their position of power to belittle, intimidate, and sometimes assault the women that work alongside them.

Thanks to movements like the #MeToo campaign, women have grown less afraid to speak out and expose predators and abusers, although this may not be the case in all societies. Exposing them is only a first step. We need to put a definitive end to the culture of silence. We need more awareness and improved protection mechanisms. Most importantly, we need to make sure such offenses do not go unpunished.

But this is not the only place in which women journalists face peril. They are much more at risk than their male counterparts in the field and while covering certain beats. They are at times harassed, intimidated, blackmailed or even assaulted by interviewees.

They are also increasingly at risk online. They face misogyny and sexism, subversive groups and politically motivated actors who frequently carry out ruthless digital attacks. Hidden behind the veil of anonymity the Internet offers, they take it upon themselves to destroy these women’s public image and their motivation to do journalism. Death and rape threats, the leaking of private information and character assassination are unfortunately commonplace. As a result, women journalists can be tempted to self-censor, to abandon beats they loved, or to quit journalism altogether. We cannot accept that women be silenced because their reporting is inconvenient to some, or because there are people who are angry that women can dare to be so vocal.

To be impactful, to truly reflect our world in all of its complexity and nuances, journalism needs diverse voices. Journalism needs women. It needs women of all ethnicities, of all social classes, LBTQ women, women with disabilities, marginalized women. There is still a lot left to be done to tackle misogyny at its root and to break the glass ceilings that have kept women out of executive posts in the newsroom and elsewhere.

This collection of essays encourages journalists to fight back. The authors of these essays, in all of their diversity, are precious examples of women journalists who have dared speak out. They are women who have challenged outdated stereotypes of what women should do, how they should behave, and what they are allowed to speak about. Through their courageous testimonies, they tell us of the difficulties, problems and personal tragedies they were forced to face in their careers. But they also tell us stories of resistance, of fighting back, of unity and of solidarity.

As UNESCO’s Goodwill Ambassador for Freedom of Expression and Journalist Safety and a journalist myself, I believe publications and testimonies such as these are meaningful and necessary. They also send a strong message of hope and resilience to other journalists who may experience similar situations of abuse. It sends them the message that they are can overcome this, and that they will not be silenced.

Host of Amanpour on CNN and PBS 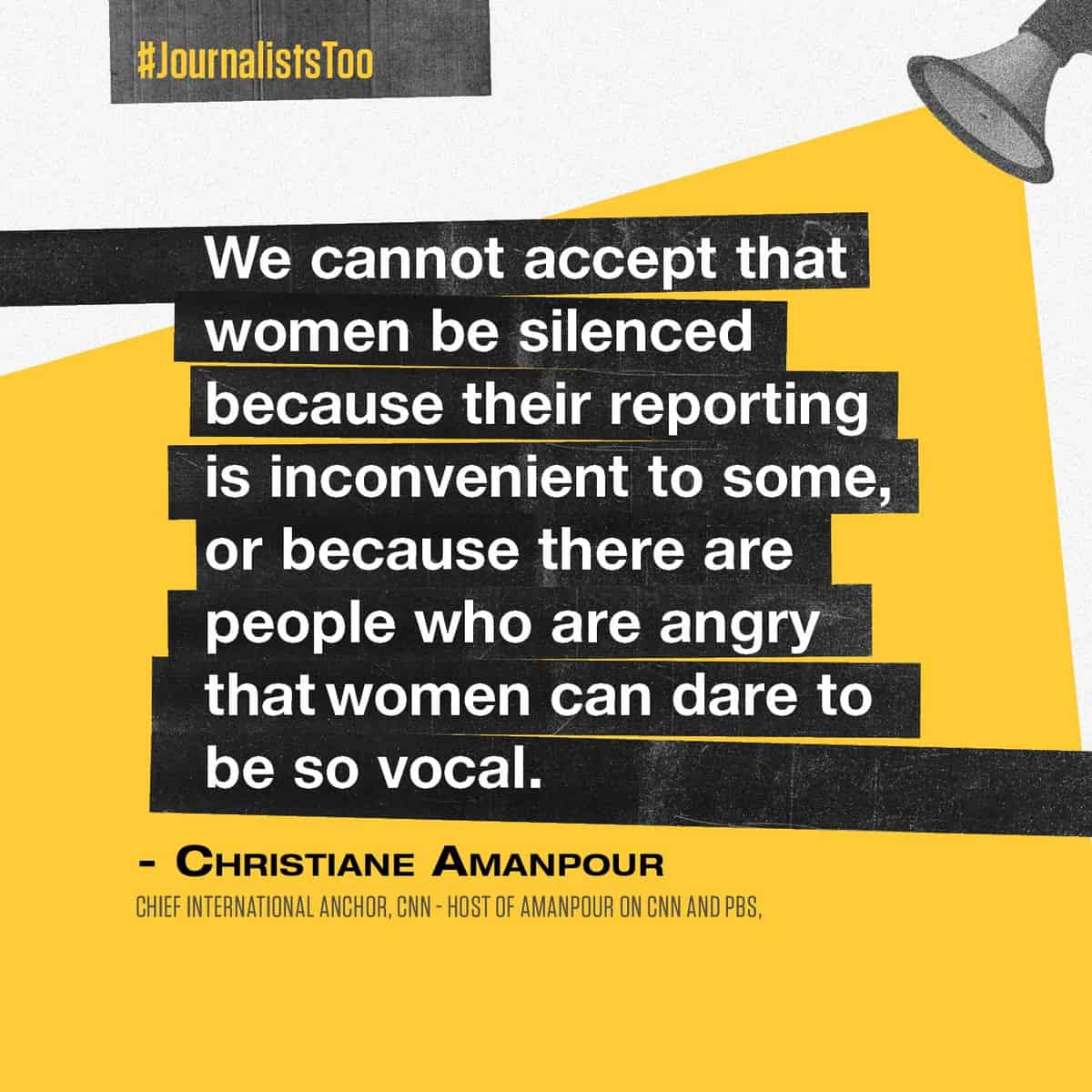