Absolute loneliness. It’s the second sensation that overcomes you after a violent attack. The first one is feeling muerta en vida, dead even though you’re still alive.

That’s how I felt on May 25 in 2000, after being tortured and raped by three of the men who’d kidnapped me when I was waiting at the door of La Modelo prison in Bogotá to interview a paramilitary leader.

Until this moment, the idea that being a journalist could cost me my life wasn’t on my radar. Despite a first attack the year before, and constant threats in the days leading to this attack, I never believed the criminals would be so daring. I was the daring one, for continuing to denounce the network of arms trade and the trafficking of kidnapped persons orchestrated by paramilitaries, guerrilla fighters and members of the Colombian security forces. Publicly, these groups were all bitter enemies. But in private, in the darkness of crime, their relationships were transformed, and they became the best of partners.

One thing is clear about my case, 19 years after what was a tragedy both for me and for journalism in my country – had I been a man, the order would have been carried out without hesitation. A shot in the head from a hitman, and that’s it. But because I was a woman, they didn’t only kidnap me. They also had to use me to humiliate women who would dare to do so much. Rape.

To take deep breaths again, after several days in the hospital when all I could think about was possible pregnancy, how I could show my face in public, or what I needed to do to finish dying (suicide), became the hardest and most complicated task. And I found in journalism the oxygen valve that saved me and is still my main engine today.

Getting reacquainted with one’s own story, through other people’s stories, all coming out of the barbarity of war, could be considered a re-victimization. But in my case it was first a source of motivation, second an answer, and finally a cause. A cause to seek justice and to reclaim thousands of Jineths. Because sexual violence can have thousands of faces but in the end you only need one name to denounce it. All the more when the victim named is a journalist and she can give visibility to a crime that continues to be taboo in many countries of the world.

For nine years, I refused to recognize myself as a victim because I always believed that journalists had no right to complain, and even less the right to be activists. But the day I managed to restrain my demons and raise my voice, in September 2009, I began this transition of pain that stands up to impunity, with the incentive that every victory in a courtroom is a door that opens not only for you. Behind you are hundreds of victims who see a light of hope in your case.

What may be the most difficult part of the fight is bringing the culprits to jail. Crimes against journalists are always surrounded by corruption and power, and when there is sexual harassment or violence, the chances of reaching the trial phase get slimmer with each action or piece of evidence. In my case, the struggle began alone, without witnesses, without evidence, without a file. I was stigmatized by my own colleagues, who made me out to be the only person responsible for what had happened to me, and not a victim. Maybe that’s why it took so long for me to see myself as one.

For years, I attended innumerable hearings at the Attorney General’s office to give my testimony, trying to prove I had been raped, trying to materialize with my words something that was very clear to me in the privacy of my home. That I was muerta en vida.

One afternoon in 2009, during one of those exhausting days, I was sitting on the stairs of the Attorney General’s office, and the former Director of the Foundation for Press Freedom (Fundacion para la Libertad de Prensa – FLIP) found me crying, ready to quit pursuing a judicial process that hadn’t even started yet. He was the only one who believed in me, and thought it was possible to identify those responsible for my assault. It was the turning point of this battle against impunity.

Then came grueling days of reconstructing the facts, hearings, interviews, judicial proceedings, retelling time and time again my rape, new threats, relapses, returning to the psychologist, contemplating suicide for the second time, my weight dropping to 39 kilos and relentless anorexia. And yet, paradoxically, my soul was getting stronger, and so was my voice.

This is how the campaign I now lead was born: No Es Hora De Callar (This is not the time to stay silent). I was no longer ashamed that people knew this woman they saw on television or whose articles they read in the pages of El Tiempo had been horribly raped.

My body was my greatest ally because it enabled me to endure a series of marathon days, with the support of FLIP and Oxfam, to knock on the doors of the Spanish government, to reach the European Parliament, the United States Congress, the White House, the House of Lords in London, travel through Ireland, the Netherlands, Germany and France, as well as present the case before the Inter-American Commission on Human Rights (IACHR) in Washington. There have been countless trips, meetings, hearings, letters and petitions, and even more tears.

I believe, in the end, these tears also represented the strength of knowing that despite the circumstances, I was still attached to journalism. It is what to this day has allowed me to stay alive, because despite my case having reached an international level, the threats have not stopped.

In 2018 alone I received seven direct threats, in which the authors reminded me “not to forget this is what they like”, referring to rape, and that “no armoured car, no escort or bodyguard will be enough to protect” me.

But I believe there is something that does protect me. Because death stops being a problem when you have to live with it. Managing to make journalism a channel for empowerment and a tool for constant transformation is the greatest protection, when your voice becomes the voice of millions.

In recent years, through No Es Hora De Callar, we were able to get 120 women from Colombia’s South Pacific to denounce the crimes of sexual violence they suffered. These women did not smile and always looked at the ground, ashamed to raise their heads. I decided to teach them journalism. I got a multinational to donate cell phones and with the help of campaign volunteers, we showed the women how to tell their own stories. They recorded their testimonies and we turned that material into the short documentary The Power of My Voice.

Journalism, which saved my life, also made visible the sexual violence that Colombia has suffered in silence for decades. Journalism gave hope to the victims and prepared them, through No Es Hora De Callar, to make their transition into being survivors. It gave them the hope to transform their pain. It transformed my pain.

There is still a long way to go. My case has changed prosecutors three times and remains unpunished. The perpetrators of the crime may never be brought to justice. There has been no progress through the Colombian courts. The case is now advancing through the IAHCR procedures.

Perhaps I will need to go through more legal hearings and many more tears, but the worst is over, because the stories that journalism has allowed me to write and tell are the best legacy for those who face sexual violence. They are a source of strength for women who, like me, found in journalism their reason for existing.

I’m often asked how I managed to forgive and, although I initially thought I had, it’s clear there’s physical, emotional and spiritual damage for which no reparation or forgiveness is possible. But I’ve decided to do my job and be an activist with love, not hatred. I don’t know if that translates into indulgence.

The harm done to me is incommensurable, because it left me without a family, unable to become a mother, without the possibility of doing my job or going out onto the streets freely. I am always accompanied by bodyguards. I am always conscious that today could be my last day. For me, every day is my last day. This is why I dedicate myself to finding the best story, writing the best column, organizing the best conference, producing the best documentary. To continue transforming my pain through journalism. 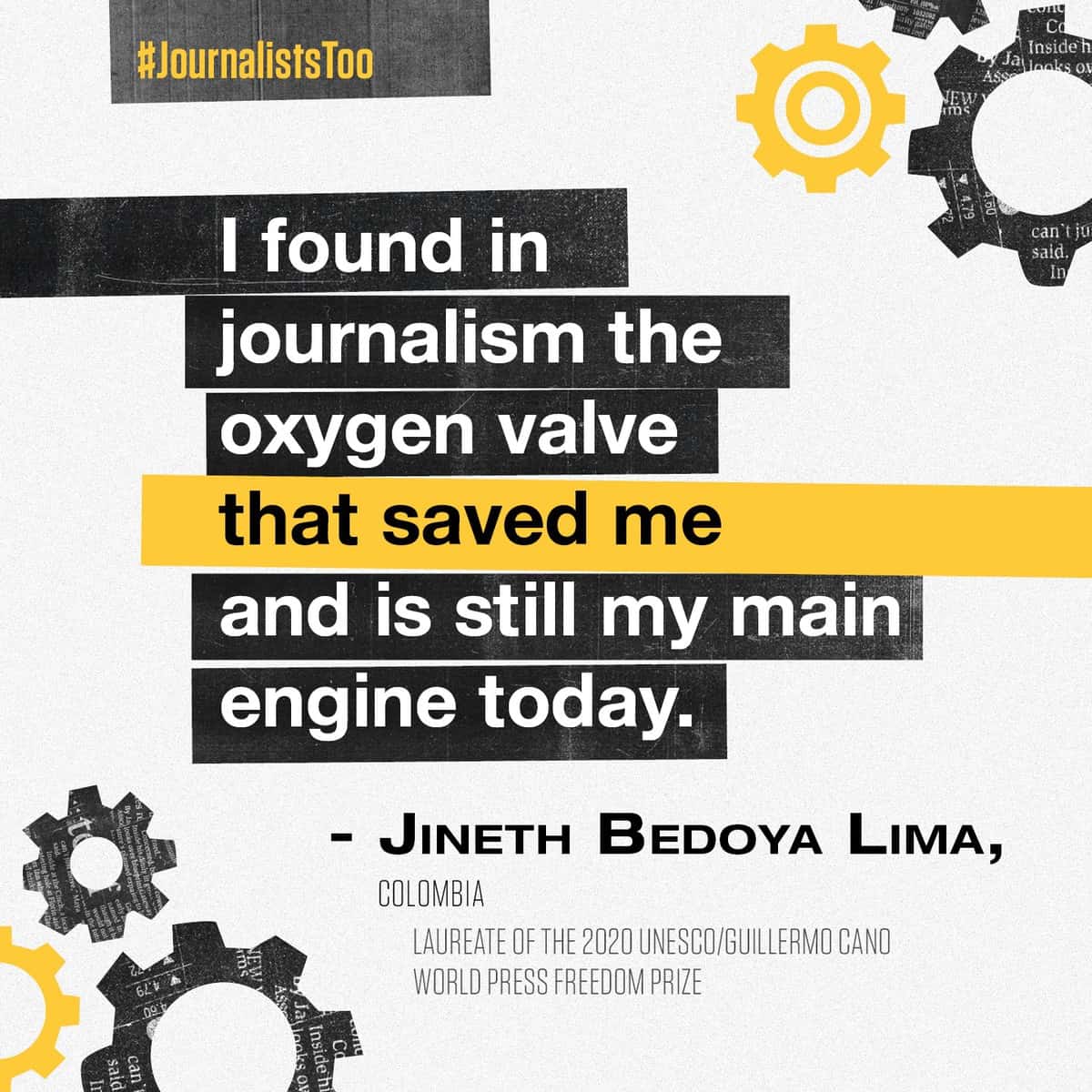