It was a rainy day, I remember it clearly. 18 January 2010, the first time I knew I had been targeted. A United States Homeland Security official called my office to tell me about some wiretaps the Drug Enforcement Administration (DEA) had. A drug cartel kingpin living in Tijuana, Mexico had given orders to have me killed.

I was not the only one under threat. Rosario Mosso Castro, ZETA’s editor-in-chief, was also on the hit list. For the following three months, we had to live our lives, practicing journalism, escorted by seven Mexican Army officers. The hitmen hired to kill us were eventually detained, but they were never brought to trial for intending to murder us.

I don’t remember the first time I was the target of sexual harassment just for being a woman and practicing investigative journalism in one of the most dangerous countries in the world for journalists. But I do remember, in 2014, the oppressive heat I felt in my chest when I started reading an email attacking me with slander. It was full of offensive sexual insults against me as a woman. It was a different kind of attack, but it had the same purpose: to destroy me by trying to discredit me and the newspaper I work for.

For the last 13 years, I have been general director of ZETA Weekly in Tijuana, Mexico. I was the first woman on the editorial board headed by Jesús Blancornelas, journalist and founder of this newspaper back in 1994. By 2006, I had become the first woman to be the general director of a newsprint media in Baja California, Mexico, and the first woman to run a weekly newspaper specializing in investigative journalism on topics such as government corruption, drug trafficking, drug cartels and organized crime.

There were more email attacks. In 2015, local journalists were offered money to publish the content of the email I had received the year before, which had been sent to numerous other people too. Ten thousand dollars if they published it and extra money if they forwarded it by email or text message. The point was for more people to read it. Pure trash.

They called me a slut. They said my personal life was linked to the information I published. They accused of me of receiving envelopes of money from a state official. My name and a family member’s were attached to various crimes. Always pointing out that I was the general director of ZETA TIJUANA magazine.

Despite the pain, shame and frustration I felt at this harassment, it did not stop me. I continued doing what I am known for doing, investigative journalism, and being responsible for a team of professional journalists focused on exposing corruption in the state government. Though our own investigations and those of other journalists, we discovered the attacks and smear campaign had originated within a member of that government.

By 2016, the harassment acquired a new form: social media. A website and a Facebook fan page were created just to keep attacking me with lies, most of them with sexual content and always mentioning the name of ZETA idem. They even took a picture I had shared on my personal Facebook profile, trying to duplicate it to keep spreading this smear campaign. The tactics and strategies used were designed by social media experts. With professional help, including from the State Cybercrime Police, , we managed to find out where and when the site and fake profile had been created.

Many, many times I tried to speak to Facebook staff. First, I used the help and support options provided on the Facebook site to stop harassment, and then I addressed my requests directly to the company’s offices in Mexico City. But even then, after the people in charge had been contacted, they said Facebook could not take down the pages used to attack me, it was too “difficult”. Each day, those Facebook posts reached more and more people.

Unable to press charges for libel and slander because the guilty parties remained anonymous, a lawyer representing me asked the government to intervene. Nothing happened and the harassment continued.

But then those who were behind all these attacks made a mistake. They started attacking another journalist, also a woman. And then we joined forces. We sought support among our colleagues, we called a meeting and we were able to rally more than 120 journalists who signed a petition for the government to take action. And we named those who were behind the smear campaigns. That was how our movement gained attention.

The National Human Rights Commission in Mexico sent an expert to document the case. News websites and newspapers, including ZETA idem, published the petition. Finally, the Tijuana state government responded. Those responsible for the attacks were removed from their posts. And with that, the smear campaign ended.

But later on, the same lies, the same insults were used again by other people on social media, through live streams and videos on Facebook pages. I have talked personally to district attorneys and even judges about these cases, and although this time the people attacking me could be fully identified, I was told there was no way to press charges. So they kept attacking until they got tired of it

According to the NGO ARTICLE 19, impunity for crimes committed against journalists in Mexico stands at 99 per cent. Gender-based attacks are a major element. In 2017, there were 130 criminal attacks against women journalists, 20 with a gendered element, and seven of these occurred in the digital space. We women journalists are attacked for our gender, but to date we lack opportunities to seek redress through the justice system.

We will continue to join forces and publicly demand from the relevant authorities that the perpetrators of these attacks be held accountable. It is the only solution we have found. We will not be silenced. We will keep dedicating our lives to journalism and to exposing corruption and crime. 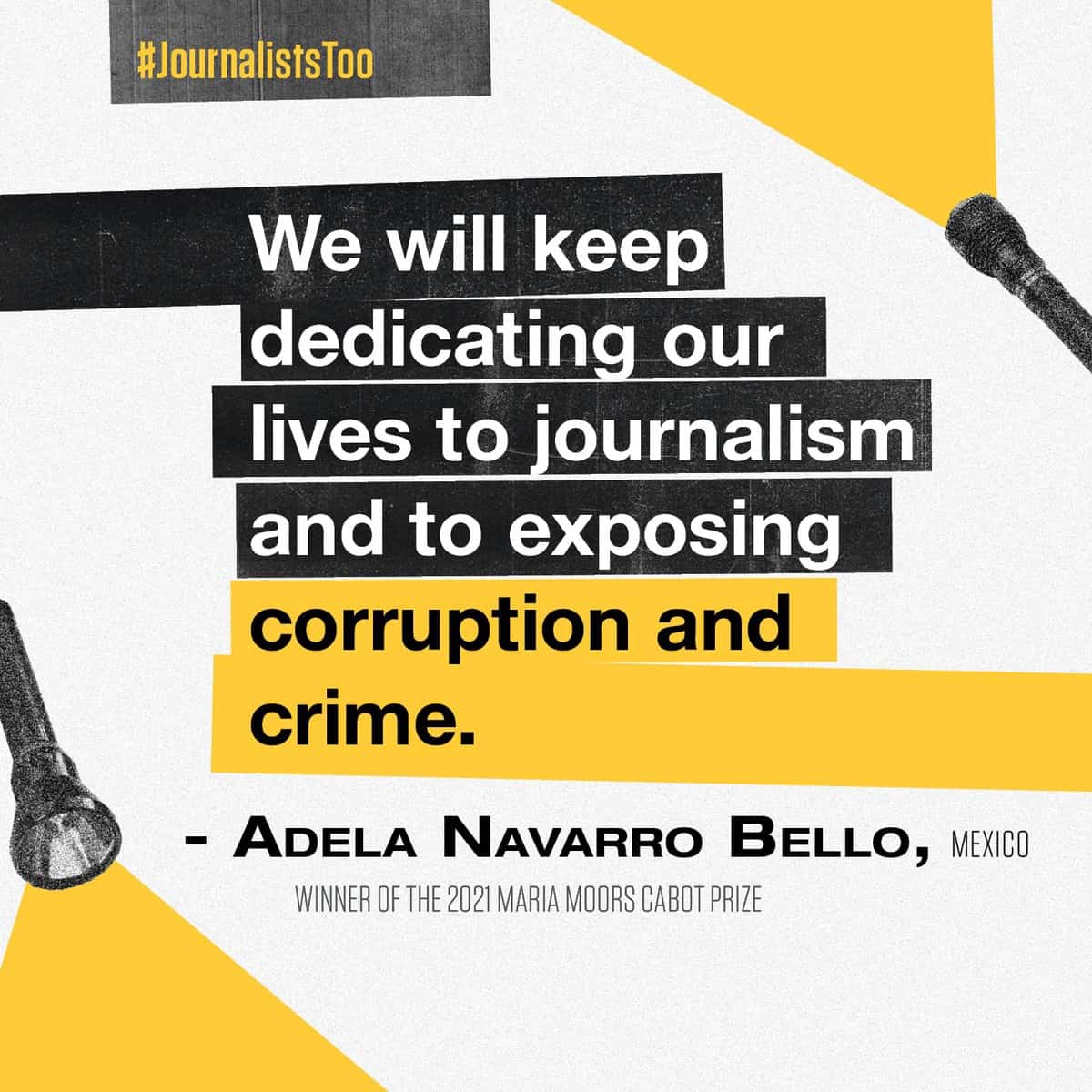