You can imagine what it would be like to be an openly gay, progressive, Jewish, female talking head on the conservative Fox News Channel during the dawn of Twitter.  And you’d be correct.  I can’t think of a single time I went on air without receiving hatemail — both over email and on social media.  And most every single time, there was something about my clothes (too butch) and something about my hair (too curly) and about my weight (just too much in general).  I got death threats and rape threats and, if I dared go on air to defend abortion rights, I would get messages from presumably irate anti-abortion viewers telling me that my own mother should have had an abortion.  Somehow they missed the irony.

But let’s be honest, the liberal lesbian chick in the Fox’s den dynamic is just the most over-the-top iteration of what is a fairly quotidian experience in my life and the lives of most women journalists.  Women in the public eye — and in particular queer women, trans women and women of color — are disproportionately harassed and harangued for having the audacity of simply raising our voices and sharing our views.  I know this from my own anecdotal experience, and from stories I’ve heard from dozens of friends and colleagues, but research reinforces the point.  The International Center for Journalists surveyed more than 700 women journalists worldwide and found that almost three-quarters had experienced threats of physical or sexual violence or other versions of online brutality.  A study by the Institute for Strategic Dialogue found that women politicians are two to three times as likely as their male counterparts to be the targets of harassment online.  And importantly, Amnesty International research has found that rates of harassment are exponentially higher for women of color.  According to Amnesty’s research, when compared to the experiences of white women, Black women are 84 percent more likely to experience abuse on Twitter.  Latinx women are 81 percent more likely to be harassed online, and Asian women are 70 more likely.  Other research has shown that lesbian, gay, bisexual and transgender people are roughly twice as likely as non-LGBT people to be harassed online, and subjected to severe forms of online abuse.

I remember the first time I got hatemail.  It was a mini screed over email that I’m afraid it’s not appropriate to transcribe here, but suffice it to say, the author tried his or her best to skewer every aspect of my identity and existence in typo-strewn prose.  But it wasn’t the content of the email that most shocked me; I’d been an activist in the LGBT rights movement since college and knew the kinds of things certain segments of people felt about me and my ilk.  Maybe I should have been less jaded, but the fact is I wasn’t upset by the nastiness in the message.  Rather, what deeply disturbed me was the idea that anyone would feel such hatred toward an absolute stranger so intensely that they would go to the trouble of finding my email address and pounding out a message; that they felt the supremacy of their views and their very existence entitled them to self-righteously pierce my privacy in order to impose their hate.  And what I realized in that moment was something that maybe had occurred to me before on a theoretical level but I’d never truly understood — how structural inequity and oppression translated at the individual granular level, where some people felt historically and institutionally justified to say and do whatever they wanted while my views and my very existence were circumscribed, inferior, always qualified by some invisible but implied asterisk of my categorical less-than-ness.  Hatemail isn’t just isolated individuals expressing their outlying outrage, but histories and systems of bias and bigotry handed the means of mass communications.   Hatemail is the personal evidence of pervasive hate.

In which sense it’s simply too easy to blame this on Fox News alone.  Because the fact is that anti-equity right wing media are throwing a match on a pre-existing pile of kindling — hateful otherizing and resentment being something they enthusiastically amplify, but did not themselves invent.  Nor something they, or their viewers, alone perpetuate.  I have received hatemail or hate tweets every single time I’ve gone on television or the radio, whether it’s a conservative program or a left-leaning station or anything in between.  MSNBC, CNN, NPR, you name it.  I still get the comments about my sexuality and my hair, littered with what is, by now, a fairly predictable smattering of degrading vocabulary.  At this point I barely pay attention.  I have, for better or for worse, become deeply jaded — to the point where I still have to remind myself how incredibly unfair and uncommon this harassment is when a friend or colleague experiencing it for the first time reaches out for support.   I’ve learned to shrug it off.  But does that also mean I’m also shrugging off the myriad injustices and inequities that give rise to such harassment?  How do I inoculate myself emotionally while still finding a constructive amount of righteous outrage?  I’m afraid that I don’t know.  I worry that I’ve come to accept hate as normal. I worry that we all have.

Hate isn’t new.  But the barriers to spreading it have lowered, which raises the costs of having a public voice or being a public figure in this era.  And that’s another conundrum we have to figure out — how we ensure that the very voices and leaders we need in this moment to fix not only the current culture of harassment but the enduring systems and institutions of oppression behind it, that those leaders aren’t the ones systematically discouraged from leadership because of these dynamics. 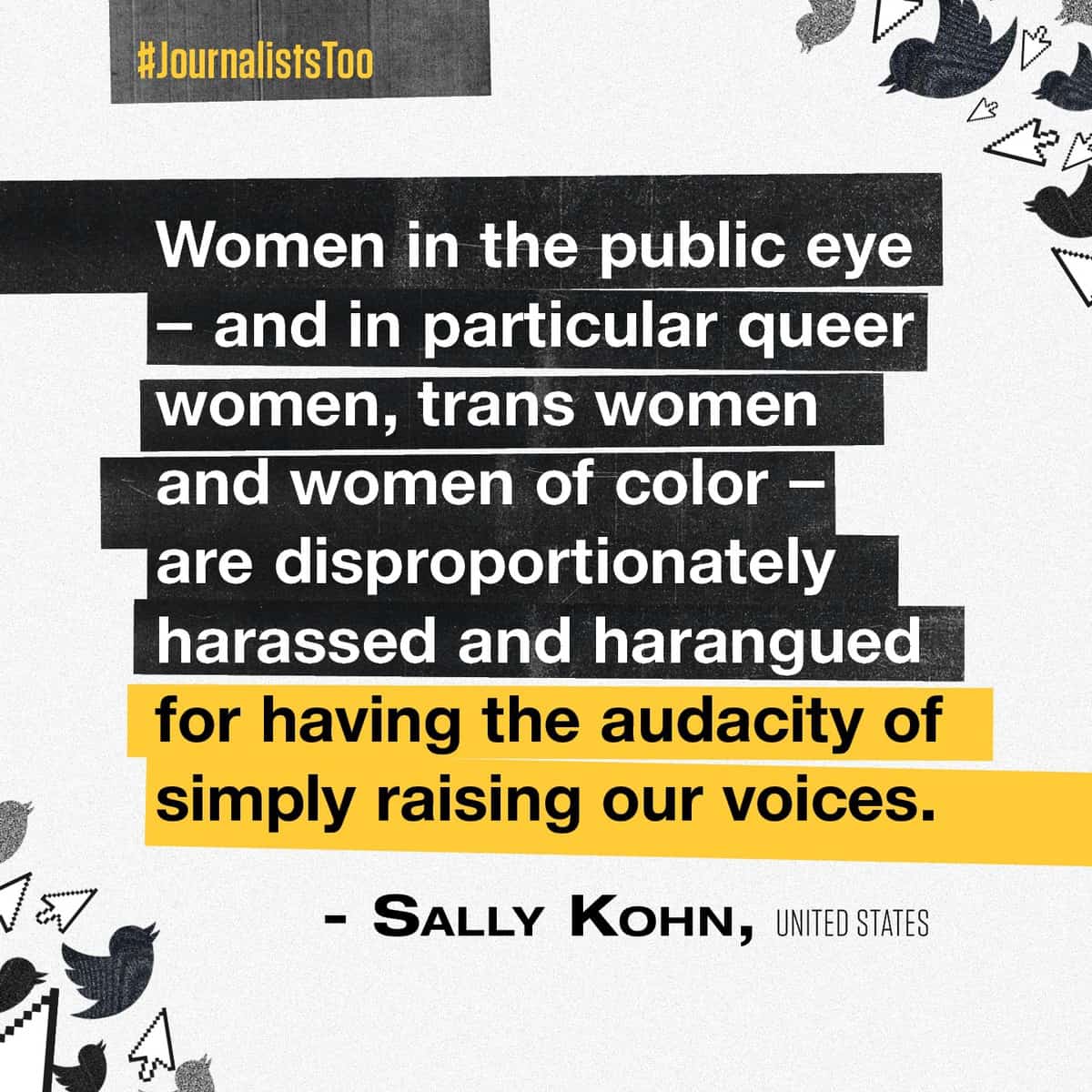