“Journalism is not for good women from reputed families,” said my old-school grandfather, patriarch of a North Indian regressive Brahmin family and a former bureaucrat, in 2003. He was reacting to my announcement to the family, which had never sent any girl to another city to study, that I wanted to go to New Delhi, 500 km from my hometown, Lucknow, to study journalism. My rebellion against this patriarchal diktat, aided by my mother and brother, earned me a scandalous reputation in the family, a social boycott, and the ire of an emotional father who didn’t visit me for the next three years. My twelve-year career as an investigative journalist hasn’t been such a small feat.

Against the backdrop of resisting the inherent misogyny and patriarchal structures within the family, when a woman journalist is confronted with criminal charges and repeated online trolling with morphed pictures, rape and death threats and defamatory accusations, along with sexual harassment and sexism within media organizations, it epitomizes the double-edged sword she is fighting with every day of her life. This may not be an encouraging message to small-town girls aspiring to prove their mettle in the big city. But what’s definitely true is they’ll be alone there, so they’d better toughen up, for better or worse.

In 2008, I was interviewing a leader of a kangaroo (vigilante) court – known as Khap Panchayat in India – that had issued and executed diktats of ‘honour killings’ on six couples found guilty of self-choice marriages. In the middle of the interview, he stopped to look at me and said, “If you were a woman from our clan, roaming around with a male camera person the way you are doing now, we’d have you crushed under a truck as punishment for dishonouring the community.” Such direct threats – plus reporting trips where mining mafia chased my vehicle and politicians made sexist remarks and overtures, as well as lecherous bosses at the office – framed my initial years in journalism. The threats at work were met with shock and condolences by the media organizations I worked for, but no support or action. There was no point in reporting these mishaps to the family. It would have meant proving the patriarchs right and being forced to pack my bags and head back home.

Since then, it has been clear to me that bravery is not a virtue but a necessity for women journalists. Taking threats, abuse, sexism, harassment in one’s stride. The reasons? One, so you’re not assigned ‘feeble’, ‘soft’ stories and get a go at the hardcore stuff. Two, because no internal mechanism that will come to your rescue exists within the organization or the external press bodies. Three, so that you can continue to do the work and live the life of your choice as an independent woman.

In the last 12 years, I have reported on human trafficking, child abuse, gender-based violence, sectarian riots, alleged extrajudicial killings by members of the Indian police, mining mafia, illegal clinical trials, and religious and ideological fundamentalists. In all these years, the threats and abuse have changed form but never perished.

Earlier, each time I received a legal notice for a piece of reportage, editors would call it a ‘badge of honour’, proof that the report had made an impact. There was at least an outward show of adhering to the law of the country. Journalists could stand by their stories and present facts when they had their day in court. However, in the last five years, journalists in India are faced with new forms of pressure, of a much more dangerous nature: online campaigns of abuse by a paid troll army as well as the risk of physical attacks by fundamentalist groups. In a country with one of the highest populations of under-25 year-olds and a severe unemployment crisis, several reports have shown how certain right-wing affiliated parties, including those in power, have hired jobless youths at an abysmal salary to work as trolls.  This raises two questions that apply in many societies. How can journalism be done in the face of apparent weak political will? And how can some political actors remain unaccountable for curbing the basic freedom of expression and promoting a culture of misogyny?

For the past five years, every morning, I wake up to dick pics, poop pics and long Twitter threads discussing how I should be raped for writing a particular news report. Whether it should be a metal rod or a thorny stick from a rose bush. Pictures of my family, my residential address inciting stone pelting – such items surface online with alarming frequency. And gun-toting political party henchmen tell me how they are tracking my location and soon I will be shot dead.

I initially tried to argue, present facts and file complaints with the central government cyber cell, but when none of my attempts worked, I developed immunity, indifference. It is sick that I have started finding humour in trolling. If a troll calls me the ‘wife of a Lashkar-e-Toiba leader’ for writing about mass rapes of Muslim women in sectarian violence, I wonder why am I the Wife and not the Leader? Even the trolls don’t give me agency as a woman.

Offline, high ranking police officials have called me up casually to say if I continue reporting on extrajudicial killings and police shootouts, they know where my mother lives. While out alone on reporting assignments, I have been locked up inside religious seminaries and told to watch my behaviour as a woman.  I have been chased by police informers who enjoy impunity from the State. In the absence of a political will to stop the attack on women journalists, the only way to escape these situations is individual persistence and resolve.

It bothers me that in the sea of attacks, trolling and abuse, my identity has been reduced to that of a victim. Someone who is threatened and attacked a lot. In this discourse, the journalistic work and its subjects – poor working-class women, religious minorities, human rights and marginalization of tribals and Dalits, the so-called ‘untouchables’ – are lost.

In a heavily corporatized media, where a corporate-political nexus allows the killing of fact-based, in-depth investigative ground reporting, I started working as an independent journalist. While this decision has enabled me to find an outlet for the stories I want to report, it has denied me institutional support to deal with the harassment and the criminal charges filed against me in far-flung areas.

Since the magnitude of these threats is so large, I have now decided not to file complaints any longer. I also realize if I keep chasing these complaints, in a climate where the government itself can’t seem to curb the problem effectively, I’ll have no time for the work I came from my hometown to do – reporting and telling the stories of the marginalized.

Most journalists who stay true to their duties are threatened, attacked and abused. In India, Gauri Lankesh, a veteran journalist based in the South Indian state of Karnataka, was shot dead in September 2017. The Special Investigations Team (SIT) found out the 18 people involved belonged to a religious fundamentalist group that justified the killing with a quote from a religious book: “It is a sin not to slay an evildoer; violence towards evildoers is non-violence itself.” The SIT confirmed that the murderers were part of an “organized crime syndicate”.  The fact that a woman journalist was identified as the ‘evildoer’ shows to what degree a patriarchal society is threatened by a woman journalist. No wonder I was told many years ago that journalism is not for ‘good’ women.

There is a Hindi proverb, “A turtle makes progress when it sticks its neck out.” In this case, the ‘evil’ women are doing the same. 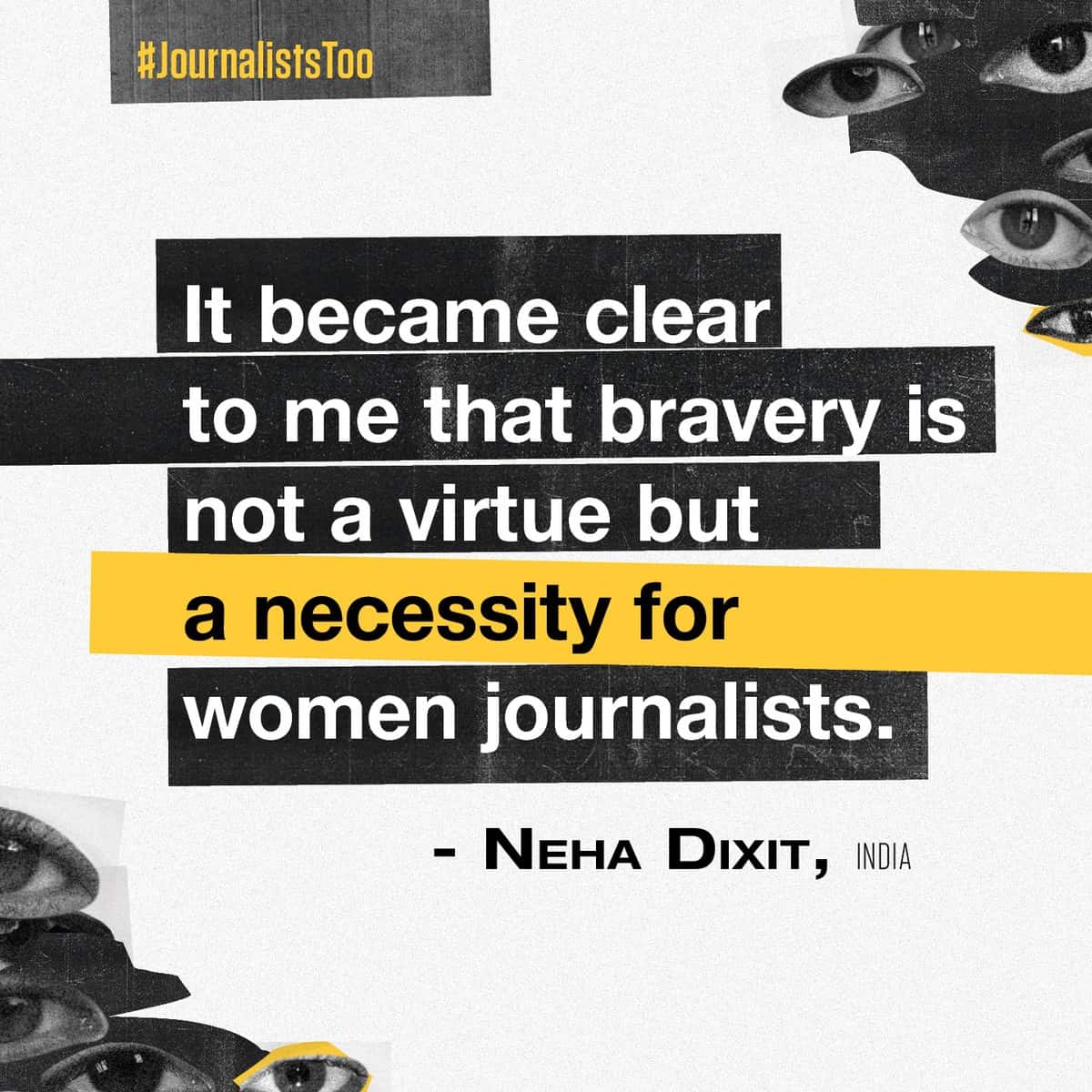