The troubling truth is that most of us would have boarded Peter Madsen’s submarine.

It’s the kind of thing you do when you’re a writer, a journalist, a freelancer and a woman just as inquiring about the world and its myriad stories as your male counterparts.

In September of 2017, I’m taking a grim tally at a journalism conference in Nashville, Tennessee.

I’ve recently met Sonia Paul, a close friend of slain Swedish journalist Kim Wall. Sonia’s identity is revealed and illuminated by a Ugandan LGBT+ activist who smiles warmly at her and says “Hey guys, this is Sonia. I’m very sorry about Kim.”

When Sonia leaves our group for a moment, I make the stomach-twisting count.

“I would have got on his submarine too. Would you..?”

The deadly decision is unanimous.

Every woman at the table nods in agreement and I realise in, some ways, we are all Kim Wall.

Not because we all possess her incredible talent or had our lives brutally and abruptly ended by Danish inventor Peter Madsen. Rather because, as women journalists, we go out, we pursue stories, and sometimes that means putting our trust in our fellow men to devastating results.

As a freelance travel writer, I’ve learnt to lock and key the bad bits.

When I take my very first overseas work trip and I’m sexually assaulted by the porter showing me to my room at a prominent hotel in New Delhi, I choose not to get off on a bad foot with my esteemed hosts by reporting the incident.

Instead, after five days spent in a country I’ve always dreamed of visiting, I write glowing columns about the Taj Mahal, New Delhi’s breathtaking chaos and the heartwarming idea that in India a guest is God.

As a first-time travel writer, I write not a word about the assault.

Intuition tells me that if I talk about the porter grabbing me in my hotel room, pushing me backwards and forcing a hot, wet, soul-destroying kiss, I’ll be some kind of nuisance.

A woman journalist who isn’t as drama-free as a male correspondent, who can’t suck it up, get on with her job and see the bigger picture.

For better or worse, that incident has inspired my travel journalism philosophy.

When I find myself bumping along a forest road alone with a tour guide in Bali and the conversation suddenly turns sexual, I try to make light of it.

I laugh nervously and feign nonchalance when he asks whether black women are as wild as rumoured in bed. I pretend to answer a fake call from a boyfriend I don’t have when he inquires as to the whereabouts of my partner and I pray for safe passage.

In a travel column recounting this day, the inappropriate questions, the fear and the messages attached to photos of my tour guide’s business card, face, alternate phone number and Facebook profile where he identifies himself by another name, which I surreptitiously sent to my best friend James, are left out. Because, often, once you’re home safe, the crappy parts pale in comparison to the majesty.

You live to explore, experience, inquire and write another day and these things tend to melt into the bright blue water surrounding a sea temple at Tanah Lot.

They whip away on the wind ruffling a woman’s brightly coloured hijab on a rice terrace in Tegalalang or they slowly dissolve in the sheer joy inherent in being an African woman journalist out in the world, adding to a canon dominated by Western, mostly male voices.

But except for perhaps one article – “Travelling while African” – I keep these struggles to myself.

I omit the sexual harassment.

I don’t tell anyone how many times I am solicited for sex in Rome even though I am clearly carrying a camera, a tripod and scribbling notes into a journal, as I do everywhere.

Though I sell my Ghana travel stories to two publications, I never mention the ten or so men who surround me in Accra, on Labadi Beach.

The ones who angrily shout for me to show them the photographs of an empty section of sea a guard assured me I could take, until a “manager” quells their yells of “stupid woman, arrogant foreign journalist”.

Again, I publish not a sentence of it.

Instead, I weigh the sheer privilege of travelling in Africa, the relative beauty of my experiences and of being a paid writer, against everything that I have ultimately survived and I decide to omit the experience.

Because we need women to travel.

We need women to take up professional space.

We need women to normalize fearlessly living our lives, intrepidly pursuing stories, our dreams and careers through excellence and critical mass and this doesn’t happen if we are afraid.

We don’t legitimize the female gaze, change the world and the perceptions of people in it, if we stay home. If we step back, cowed by the kind of pervasive intimidation that strives to diminish our existence, attempts to dictate the length and breadth of our lives and the depth of our contributions.

In a warped way, at least for now, I’ve come to think of these aggressions, intimidations and assaults as some sick unspoken trade-off.

But as a freelancer, you’re on your own.

The ideas, the passion, the pitches and the elation in writing a lot of what you want to write are your own but so is the risk to your equipment and person.

Which is why every freelance woman travel writer I’ve encountered has her spells.

The rituals, precautions and talismans she carries with her that create a compelling veneer of safety.

A thin gold crucifix from a mother. The habit of sending a loved one their entire itinerary for the day, before breakfast. The practice of making themselves hyper visible.

That last one, alongside a small woven golden luck dragon named Falkor, is my own.

Though, as a solo black woman traveler, I often stand out, I always feel safer when I’ve made some local acquaintances.

I learn greetings, befriend hotel staff and regularly pop by stores, kiosks or stalls to buy small things I don’t need, always making sure I tell a few people how long I’ll be around in case I disappear before I’m due.

Such are my small, desperate attempts at safety which, in my heart of hearts, I know are no match for the violence, entitlement and the dull ever-present terror that is patriarchal society.

Six years after that night in New Delhi, I know my life as a travel journalist only changes when the world does. So I try to do my bit.

As a woman, a freelance columnist and journalist, I try to exist and travel unapologetically, while in my home city of Windhoek, Namibia, I join the fray.

I march against gender-based violence and for human rights.

I send a pointed email to an entertainment producer who drunkenly gropes me while I’m covering a performance.

I ignore the inbox messages and text messages from men who acquire my mobile number and call me a c**t, a man-hater and a gold-digging whore. And I slump in horror and fleeting defeat as the feminist issue I pitch to the country’s biggest national newspaper is published on the same day as two sisters are found murdered in a riverbed by the younger one’s boyfriend.

In defiance of this and because of it, as women journalists and moreover as women, a luta continua.

We travel. We write. We photograph. We witness. We protest. We march. We beseech. We exist, and I imagine Kim Wall as a flame.

The tragic story that burned us and a lamp that lights the way. 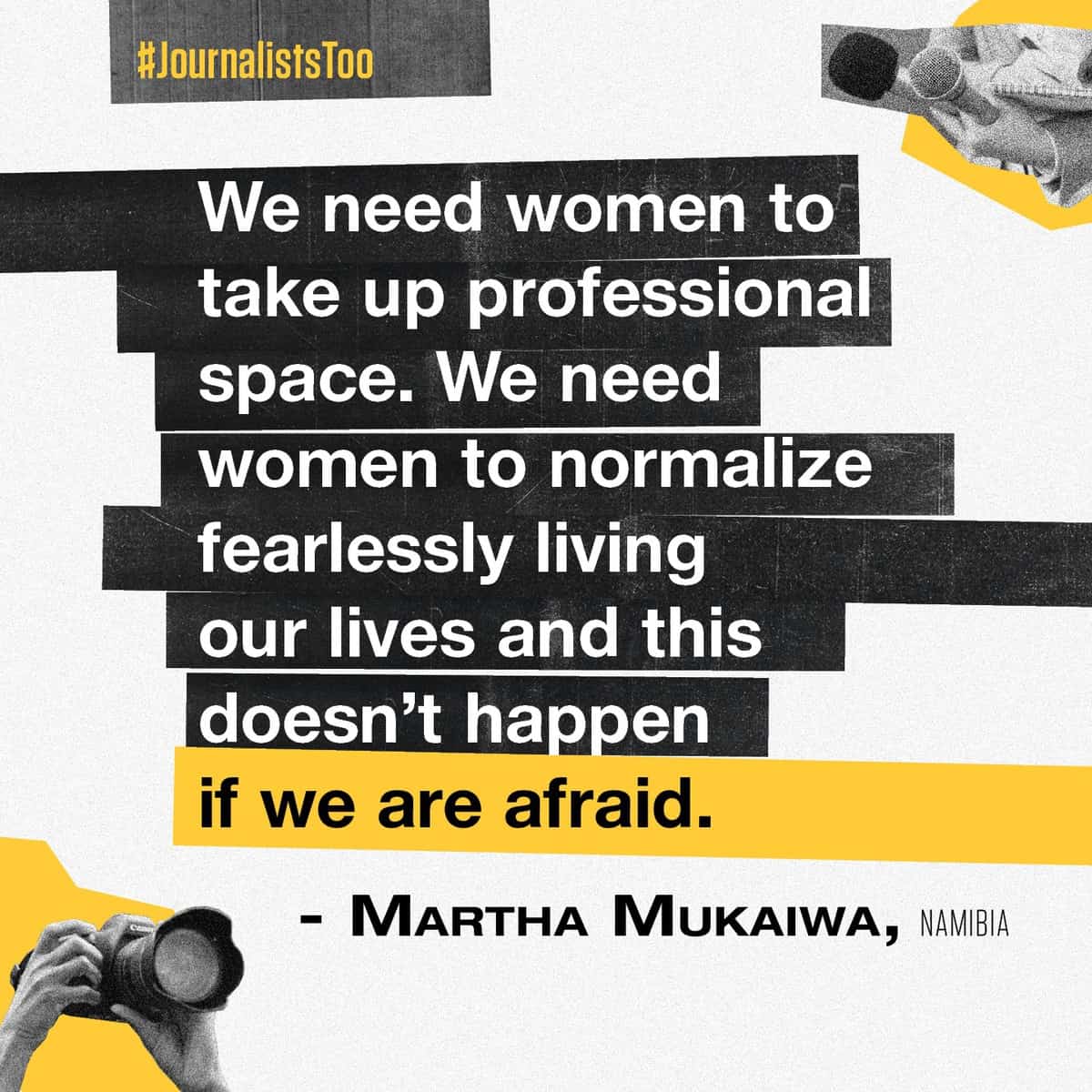