Journalists have long played an instrumental role in uncovering and reporting on cases of sexual abuse and harassment. It was only after the #MeToo movement emerged and women began speaking out about their personal experiences of sexual violence, abuse and harassment in the workplace that the extent of the problem that women journalists themselves faced became evident.

While both male and female journalists are exposed to violence and threats to their safety in retaliation for their work, attacks on the women are gender-based and highly sexualized online and offline. In my report on gender justice and freedom of expression (UN Doc A/76/258) I label acts and threats of physical, sexual and psychological violence to silence women as the most pervasive and pernicious form of gendered censorship.

Women journalists are targeted not only for the content of their reports but as women who dare to speak out. The attacks are intended to intimidate, silence and drive them out of the public sphere. They are a blatant violation of freedom of expression and the right of public participation. They threaten society’s right to information from a diverse media, erode pluralism and undermine democratic debate.

In the pages that follow eleven women from ten countries speak of their personal experiences as journalists in their own words and under their own names (bar one who writes anonymously out of fear of retaliation). We read about the daily challenges they face from family, communities, employers, officials and the general public, and the steadfast courage and determination with which they remain true to their profession.

The women describe in stark language the threats and attacks to which they are subjected in the course of their work, ranging from rape, sexual assault, death and rape threats and sexual harassment to trolling, gendered hate speech, disinformation, smear campaigns and threats to family members. They highlight how sexism and misogyny intersect with other forms of discrimination, such as homophobia, racism and religious bigotry, to intensify the attacks online and offline.

The abuse is inescapable and ubiquitous across the continuum of real and virtual worlds. The perpetrators are multiple, from state agents, politicians and non-state actors to sources, interviewees, employers and male journalists with whom the women are obliged to work. The response from States, social media companies and media employers is often inadequate or absent.

These personal essays are not the stories of victims. They are testimonies of courage, resilience and solidarity, of defiance against gender stereotypes and of the agency of women who refuse to shut up or be shut out. In several of the essays we read about the solidarity networks, advocacy campaigns and tools the women have developed to combat online and offline violence and pursue accountability. They inspire not just other journalists but all women who are seeking equality and justice.

As the Special Rapporteur on violence against women pointed out in her report, violence against women journalists is rooted in the broader problems of sexism in society. The UN General Assembly Resolution A/RES/74/157 called upon States to address such violence as part of broader efforts to promote and protect the human rights of women, eliminate gender inequality and tackle gender-based stereotypes in society. Resolution 39, adopted at the 39th session of UNESCO’s General Conference, invited the Director-General to reinforce activities aimed at addressing the specific threats to the safety of women journalists, online and offline.

Despite these efforts the reality shows that much stronger concerted action is needed at all levels to address the impunity, sexism and misogyny on which violence against women journalists thrives.  Governments must develop effective prevention, protection, monitoring and response mechanisms for online and offline safety of women journalists. Social media companies must make digital spaces safe for women. Media companies must ensure zero tolerance of gender violence or harassment in the workplace. Politicians and community leaders must condemn attacks on female journalists and refrain from making statements that could put the women at risk.

It is unacceptable that women journalists are attacked and abused for doing their job. It is intolerable that it happens with impunity. It is high time we listen to the voices of the women themselves. 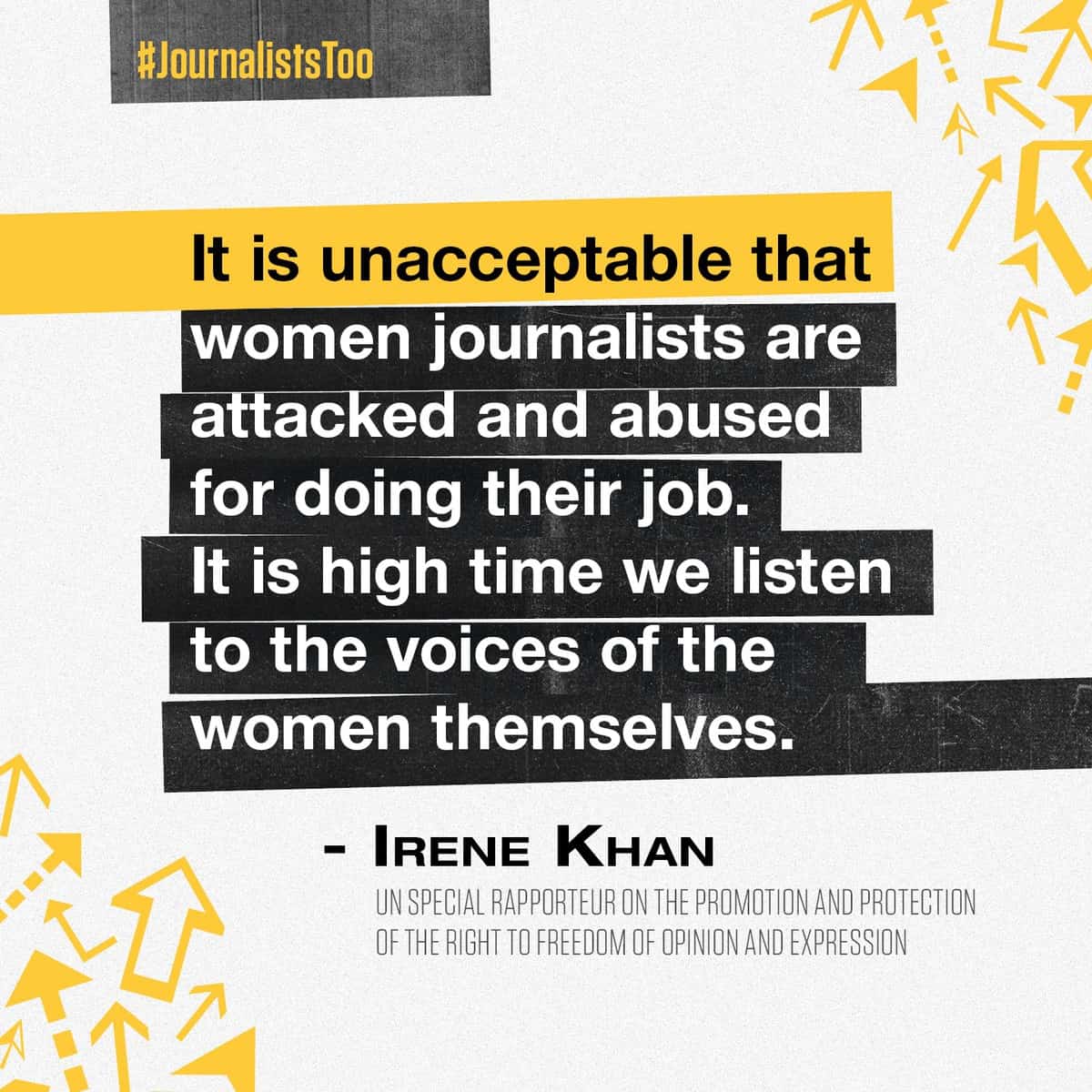